While the rest of the World and other parts of Canada were unsettled by the change in the world economy, British Columbia remained steady and was seen as an oasis of calm. Its resilience and economic strength stems from its business diversification program with direct access to Asian markets, and above all good governance.

A Look At The Economy And Governance Of British Columbia

While the rest of the World and other parts of Canada were unsettled by the change in the world economy, British Columbia remained steady and was seen as an oasis of calm. Its resilience and economic strength stems from its business diversification program with direct access to Asian markets, and above all good governance. This success may be due to the port generating unprecedented amounts of income and the provincial government making the sensible decision of reinvesting it right away.

The port has a lot of activities going on, and the government has made million-dollar decisions to invest in port capacity, that in turn has helped the creation of a huge amount of construction jobs that help propel the economy of Canada as a whole.

With oilseed, Canadian grain, and wood products on their way to the lucrative markets of Asia, creating 700,000 jobs in areas like; Lower Mainland, North shore, and the East side of the Burrard Inlet.

Tourists visiting the province continue to grow annually and Vancouver International Airport has introduced new flight routes to Asia while still luring travellers and vacationers from other parts of Canada.

The provincial government currently has plans and is negotiating with concerned stakeholders to make Vancouver the regional base for Asian firms and companies. The trade and business relationship between Canada and the U.S.A will always be big, but the emergence of Asia as a business partner cannot be ignored and British Columbia is well placed to take full advantage of it.

As strong and resilient as the British Columbia economy is, it is not immune to global economic difficulties like; increase in commodity prices, and sharp drops in oil and coal prices. The provincial government’s support of a much-lauded decision to export liquefied natural gas (LNG), to Asia and China specifically has faced some challenges, although this was expected and the forecast is good.

The British Columbia government will soon post $277 million surplus in the 2015-2016 financial year, this represents the provinces third consecutive balanced budget. It emphasises the point that even though the economy of the province hasn’t exactly gone through much growth lately, it is stable and controlled unlike other parts of the country and world.

The governance of the British Columbia government has contributed tremendously to the unprecedented economic stability of the province. The decision to diversify in terms of economic production and the supply to new markets that were previously thought of as too risky has proved to be the key, and other provinces have looked to learn from them.

Another contributing factor to the good economy of the province is the arrival of new residents from other parts of Canada and especially the increase of new immigrants moving to the province. 1, 118 New residents moved to the province in the first quarter of 2016, and more than half of them were immigrants while the rest came from Alberta, after the oil slump experienced there. With the ambition of the British Columbia government to increase production and export of liquid natural gas, there will be many job opportunities for skilled workers who will help construct bigger export terminals. 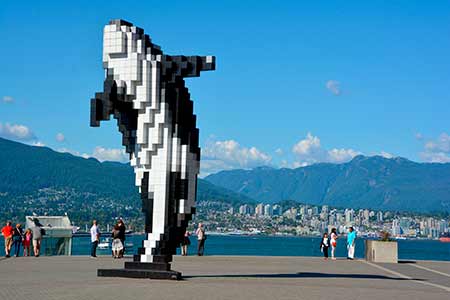 The city of Victoria has been vancoureceiving an increased number of visitors from other parts of Canada as well as from the United States, Australia, and Europe. On the other hand, Vancouver has also experienced a boost in its tourism industry, helped mostly by the improved air connections.

The British Columbia government saw an improvement of the air travel industry as one of its core areas for a healthy economy and duly invested in it. In the second half of 2015, Vancouver International Airport handled a record 19.4 million passengers, showcasing an incredible growth of 8 percent from the year before.

Air Canada has chosen Vancouver as one of its major flight routes for the new Boeing 787 Dreamliner, which has helped entice a new market of travellers from as far as Tokyo, Seoul, Shanghai and Beijing. A major shipping company from Singapore will soon open an office in Vancouver, a move that has been made possible by the newly created Vancouver International Maritime Centre, whose main aim was to attract investment to the province of British Columbia. The port of Prince Rupert is currently going through an extensive expansion program and construction work to enable it to handle large cargo such as wood chips and cement powder.

The economic success of the province has been made possible by the good governance and detailed plans that have seen British Columbia take advantage of its natural resources and foraying into untapped new markets. The province also aims to improve agriculture and forestry sectors to produce enough products for international exports as well as to other parts of Canada.

Find out how Canada is handling the pandemic and if we can expect another coronavirus lockdown in our latest immigration news update.

Getting Your Canadian PGWP After Graduation Just Got Easier

No, it’s NOT Toronto, Vancouver or Quebec City - find out which city has the most jobs in Canada right now!

Express Entry: Indian Citizens Received the Most ITAs since 2017

Discover the top 10 nationalities who receive the most ITAs. What’s their secret? Find out!

The Atlantic Immigration Program is now making the work permit application process more accessible. Find out how to work in Atlantic Canada here.

Canada Cares: Humanitarians Give Back on a Global Scale

Live and work in Canada for up to 2 years without an LMIA! Immigrate to Yukon Canada through the new Yukon Community Pilot. Find out more here.

Study Online Without a Study Permit and Still Qualify for the PGWP!

Start your a Canadian Qualification without a study permit and still qualify to apply for permanent residence through the Post Graduate Work Program.