Victoria BC has long since outgrown its reputation as being occupied by the newly wed and retirees. Today it is a vibrant city surrounded by appealing communities and home to a population diverse in ethnicity and demographics. Even though retirement living is popular in Victoria, chief among the reasons why people choose to live and settle in Victoria is that compared to the rest of Canada it is really pleasant for most of the year, with freedom to get out and enjoy different outdoor activities and especially safe neighborhoods.

Cadboro Bay is an English styl

ed seas-side village community and bay, is located in the Municipality of Saanich and north of the Municipality of Oak Bay. Cadboro Bay is a neighborhood nestled between the University of Victoria, to the west and the Uplands to the South, Ten Mile Point lies to the east and Queenwood, with its multi-million dollar secluded homes, to the north.

Cadboro Bay gets its name from the first Hudson’s Bay Company sailing vessel brought to the BC coast, the Cadboro, which was the first vessel to reach the bay.

“Sidney by the sea” is it is affectionately known, is located about 20 kilometers north of Victoria. It enjoys a temperature climate, natural amenities, and friendly community character.

Sidney has extensive waterfront walkways, parks, restaurants, and marinas. Sidney’s popular Thursday evening street market runs through the summer and attracts visitors from around the region. This attractive town has a daily ferry service to Anacortes, Washington, U.S.A, the Victoria International Airport is just 2 km away and a few kilometers from the BC Ferry Terminal to Vancouver.

A comfortable, middle-class neighborhood, Gordon Head has only recently undergone a slow conversion process of family occupancy homes and shared rental homes to meet the demands of the growing student population. There has also recently been some very upscale housing developments at Gordon Point, the tip of Gordon Head, close to the north waterfront. 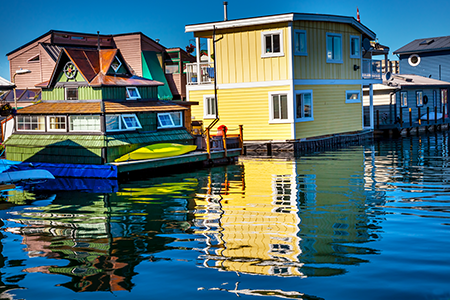 Filled with beautiful character homes and sandy beaches, Oak Bay Village is one of Victoria’s oldest and well-known neighborhoods. Oak Bay Village is an old-fashioned and lined with a number of unique shops selling handicrafts, art, books, chocolate, imported Italian food products, and wine, just to name a few. Shopping is fun and unhurried, sidewalks, coffee houses, pubs are all filled with the friendly chatter of acquaintances. Out on the east side, the Oak Bay Marina is home to a fine dining restaurant, café deli, and harbor seals. There are several seals that live in the waters around the Marina, which are visible to guests much to their delight.

Cedar Hill consists of a good mix of old and newer residential subdivisions, a new commercial area being built on the east side. The neighborhood of Cedar Hill is dominated by the massive 18 hole Cedar Hill Municipal Golf Course, which is surrounded by a 3.5-kilometer walking trail. Other parks and recreation facilities include Brae Foot Park and the Cedar Hill Recreation Centre. There are two elementary schools and a junior high school in the area.

Victoria is a city of neighborhoods each with a distinct charm and character that are well-connected hubs of activity designed for active living. It is these very neighborhoods that make Victoria such a unique and wonderful place to live.

Everything you need to know about the cost of living in Victoria, British Columbia.