Canada Express Entry immigration system was developed to help people immigrate to Canada in as little as 6 months and is used to select suitable candidates for immigration.

Introduced in January 2015, Canada's Express Entry (EE) system was developed to allow Canada to meet its future labour market needs in order to maintain long-term economic growth. In 2019, 85,300 Invitations to Apply (ITAs) were issued, 40,550 of which were issued to those who applied from outside Canada. The immigration target for 2020 is set at 195,800 through federal economic programs, like those under the Express Entry System, and this number is expected to significantly increase as the year continues.

As the main driver of economic migration to Canada, it is seen as a flagship program providing a fast-track route to Canadian immigration. Let's take a closer look at how far the Express Entry system has come, whether it is fulfilling its objectives, and what this means for you as an applicant.

At the beginning of 2015, the majority of admissions came from applications submitted before January 1. These early draws included a large number of applications from foreign nationals who already worked in Canada. Many of those immigrants were given ITAs because they had job offers supported by a Labour Market Impact Assessment (LMIA).

In the first ten draws, which took place over six months, a total of 11,353 ITAs were issued to candidates. Since the first draw on January 21, 2015, the system has developed into one of the most efficient immigration programs in Canada.

Over time, the number of ITAs issued under the system have continued to rise, because of Canada’s growing market. Due to this upwards trend, improvements were made to the system in the fall of 2016.

These changes came into effect on November 19, 2016. Aimed at creating a fair immigration system, the changes address human resource needs, while ensuring long-term economic growth for the country.

The improvements include awarding points for job offers made to eligible candidates already in Canada with LMIA-exempt work permits and to international students who have completed their education in Canada.

In addition, more time is now allocated for candidates to submit applications for permanent residence once they have received ITAs.

Points will now be awarded for study in Canada above high school. The CRS will award 15 points for a one or two-year diploma or certificate and 30 points for a degree, diploma, or certificate of three years or longer, including a master’s, professional or doctoral degree.

With these changes, more former international students will be able to transition to permanent residency using the system. Former international students are a key source of candidates for the system because of their age, education, skills, and experience. Permanently integrating into Canadian society will be easier for them, because they have already familiarized themselves with life in Canada.

Candidates will now have 60 days to complete an application for permanent residence if they get an invitation to apply. This will give candidates more time to gather all the required documentation and submit a complete application.

Since the new changes came into effect the number of ITAs issued has progressively increased and the number of CRS points required has significantly decreased.

Why the Program Is Popular

Applications can take as little as six months to process, making this program one of the fastest immigration programs in Canada. Only immigrants who have the right skills required in each province can qualify, unlike the Green Card Lotteries used in the U.S.

Applicants who are successful with the program can eventually apply for permanent residence in Canada. 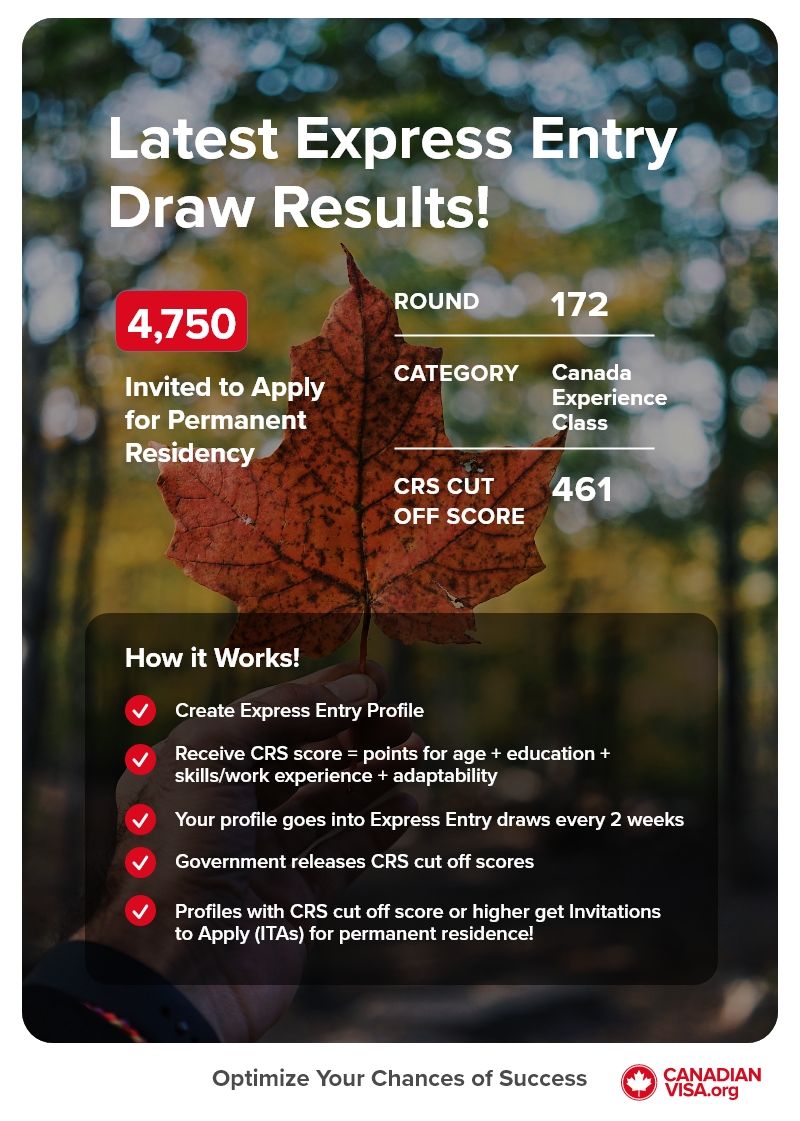 Please note that if you have a Canadian job offer, your future employer may need to provide you with an LMIA.

Applicants are ranked on a system called the Comprehensive Ranking System (CRS), which determines who gets selected from the Express Entry Pool first. This system scores you based on four main factors:

The higher the applicants’ scores on the CRS, the better their chances of becoming a permanent resident of Canada. The highest you can score on this system is 1,200 points.

There are several ways to improve your CRS scores, like receiving a Provincial Nomination that adds an extra 600 points or getting a Canadian job offer, which is worth 50-600 points. For example, a job offer from a level 00 job under the National Occupation Classification (NOC) will give you an additional 200 points. Any other job level offer from a Canadian employer will give you an additional 50 points. But a job offer under a Labour Market Impact Assessment (LMIA) will give 600 CRS points.

Another way to increase your score is through Core Human Capital Factors (600 Points). This awards points for education qualifications like certificates, diplomas, and degrees. The higher your educational qualifications, the better the score you will receive.

If you apply with your spouse or common-law partner it can also help increase your score, if they have the correct work experience and educational background. Having more work experience can also have an impact on CRS results.

Language skills are a great way to increase CRS scores. The higher applicants score on recognized French and English tests like IELTS, TEF, and CELPIP, the better the results. In total, language skills can add an extra 150 points. 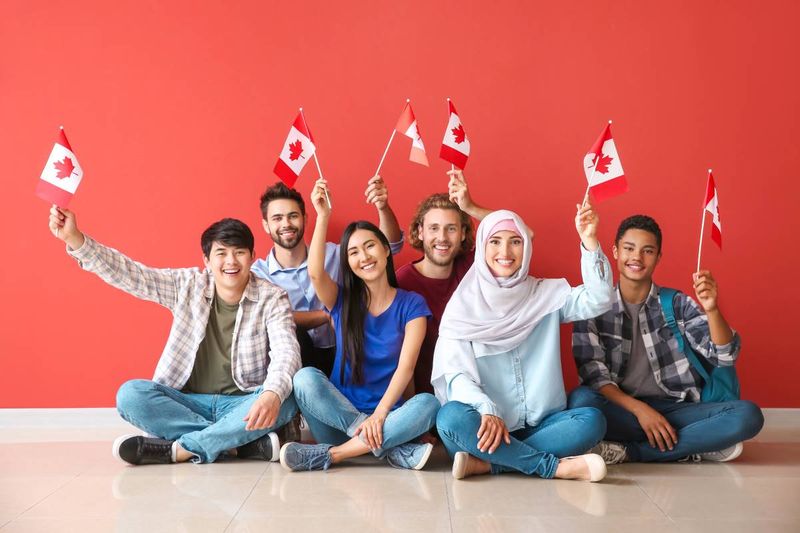 In March 2020, the government of Canada released its Immigration Plan for the following 3 years, seeking to improve ways to immigrate to Canada by making the application process easier and less time-consuming. Canada has continued to raise its immigration targets and aims to welcome 341,000 newcomers in 2020, of which a total of 91,800 is expected to be invited to apply for permanent residence through the Express Entry system and about 67,800 through the Provincial Nominee Program. These totals are expected to increase by 1,000 ITAs every year to 351,000 in 2021 and 261,000 in 2022. Below is a breakdown of the Government plan for Economic Immigration for 2020.

Do you have any questions?

1. How to Increase Your CRS Score

Your Comprehensive Ranking System (CRS) is based on the following factors:

600 points are awarded for an enhanced Nominee certificate from a province in Canada through the Provincial Nominee Program (PNP).

A Canadian job offer will also earn you points; the number of points is based on the NOC level of the particular job.

These take into account your level of education, for example:

If you intend to gain higher qualifications, your score will increase. This same point system applies to your legal partner or spouse if you applied together.

Improving your language skills in either English or French through a recognized Canadian institution can also raise your CRS score.

The more experience you have, the more points you earn. This also applies to your legal partner or spouse.

2. How to Pass Minimum Entry Criteria

You must register with the Canadian Job Bank within 30 days unless:

You must have a Labour Market Impact Assessment in order to earn Comprehensive Ranking System points, unless you:

If you qualify for any of the Federal Programs, you have 30 days from when you submit your profile to complete the rest of the requirements like registering with the Job Bank. If you do not, your Express Entry profile cannot be activated.

3. How to Apply for Canadian Express Entry

There are three programs to apply for under Express Entry:

4. How to Qualify for the Skilled Federal Worker Program

The following factors affect your eligibility:

You must prove you can support yourself and your family financially, unless:

Additional Factors to Be Considered

5. How to Qualify for the Skilled Federal Trades Program

This program is aimed at people who wish to become permanent residents (PR) of Canada. This only applies to people who qualify in a skilled trade.

These skilled trades are involved in the Federal Skilled Trades Program as ranked by the National Occupational Classification.

You do not need a specific qualification for this program, but you can earn more CRS points if you have:

Be assessed by the province or territory

Each of the provinces or territories have different requirements for the skilled trade industry.

6. How to Qualify for the Canadian Experience Class (CEC)

Work experience must be gained in the following job levels based on the National Occupational Classifications.

You do not need an education to apply for this program, but you can score higher if you:

To qualify you must score well in the various language tests determined by the CEC.

The language test must be approved by IRCC and must not be older than two years when you apply.

Note:work experience gained as a student or a self-employed individual does not count.

You do not need an education to apply for this program, but you can score higher if:

Note: Only apply for an Educational Credential Assessment (ECA) if your foreign education is either equal to, or higher than the Canadian education standard.

To qualify you must score well in:

The Language Test must be approved by the Immigration, Refugees and Citizenship Canada .These tests are based off your French and English ability to:

Your test results must be included if you are applying for this program through the Express Entry program. Note: these tests must not be older than two years when you apply.

When you apply for the Express Entry, and want to immigrate with your common law partner, you must choose who will be the principal applicant.

Note: a common law partner is a person who has been married to you for one year. This applies for same sex and opposite sex partners.

Choose the principal applicant by looking at who will score the highest points under the Express Entry program.

You may be inadmissible if you are:

Choosing Where To Live

Note:under the Express Entry you can apply to live in other provinces/territories in Canada, except Quebec. This province has its own set of requirements needed for you to enter.

These are the factors that are used to calculate CRS Points

A legal agent is an authorized representative that must be:

Note: An unauthorized agent will not be able to help you with your application.

9. Who Are Canadianvisa.org’s Legal Agents?

There are currently 3 Regulated Canadian Immigration Consultants working with Canadianvisa.org:

10. How to Check If Your Legal Agent Is Authorized