A guide to Victoria, BC if you want to live in Canada. From Victoria's biggest job industries, to the local community, healthcare systems, public transport and and must see local attractions. Check out this guide to live in Canada

Victoria is the capital city of British Columbia the westernmost province of Canada. Victoria boasts many historic buildings and some of the most beautiful museums in Canada. Established in 1843 as a fort for the Hudson’s Bay Company, Victoria’s British ancestry is evident in the double-decker buses, horse-drawn carriages, formal gardens, and tearooms. The city is now a cosmopolitan center with a vast array of attractions and a lively entertainment scene.

The city of Victoria has a population of nearly 80,000 while the metropolitan area of Greater Victoria has a population of 344,615. The city was named after Queen Victoria of the United Kingdom, and is affectionately known as the “Garden City”. Victoria is a very attractive city and a popular tourist destination supported by a thriving technology sector that has grown into the largest revenue generating private sector in the city, and British Columbia as a whole.

The relatively snow-free climate and slow pace of life in Victoria help make it a popular destination for retirees who enjoy the temperature and life in general. Victoria also boasts a rich First Nations and British history heritage, you will see many First Nation’s arts-infused in and around the city, as well as traditional British practices such as afternoon tea. At the heart of downtown Victoria, you will find the inner harbor, which is beside the Parliament Buildings and next to the famous Fairmount Hotel.

The population of Victoria was recorded as 80,017 in a 2011 census while the Greater Victoria area, comprising of thirteen municipalities has a population of over 340,000 people. Home to a large number of retirees, 6.4 percent of the city’s population are over 80 years of age, the highest number of any of Canada’s metropolitan areas. The population consists of a visible minority population of 11% made up of South Asians, Filipinos, Blacks, and Latin Americans.

The common language spoken in Victoria is English and is the language usually used in both business and social circles. Some of the city’s major industries include; forestry, mining, fisheries, agriculture, energy, and transportation.

The healthcare system in Victoria, British Columbia is administered by the Ministry of Health and has the responsibility of ensuring that quality, appropriate and timely health services are available to all British Columbians. As the case with the rest of Canada, the health system in Victoria is free and completely funded by the Canadian government.

From coastal communities to bustling cities over 50,000 people have made Victoria their home and enjoy a comfortable west coast life. Surveys have regularly rated the city as one of the world’s best places to live, topping the list in categories such as environment, culture, security and ambiance. 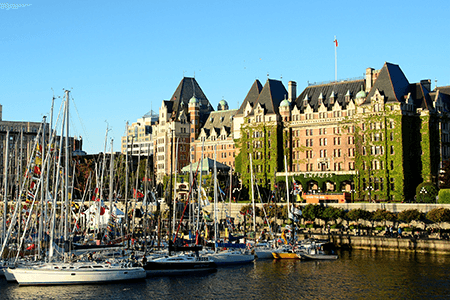 Known as the cycling capital of Canada, Victoria is home to hundreds of kilometers of bicycle paths, bike lane and bike routes in the city including the popular Galloping Goose Trail.

The city also hosts the annual bike week, whereby, residents in the communities through the Bike to Work BC society use bikes to commute to and from work for a full week.

The British Columbia Parliament Building, the unmistakable Empress Hotel, the gothic Christ Church Cathedral, and the Royal British Columbia Museum with large exhibitions of Aboriginal peoples, natural history, and modern history are some of the city’s well-known attractions.

The city’s transport system is one of the most reliable in Canada, fast, safe and convenient. The public transport system consists of the public bus, a cross-harbor ferry, and the popular Sky Train, the city’s Automated Rapid Transit system.

The city’s Blue Bus system is especially popular with working people and it includes a bus express service system from Vancouver to BC Ferry’s horseshoe terminal. The bus fares are relatively cheap with an adult one-way ticket costing $2.75 and $4 for two, a preloaded compass pass can also be bought in advance with a duration of 30 days within a specific bus route.

At CanadianVisa.org, our Regulated Canadian Immigration Consultants (RCIC) are members in good standing with the Immigration Consultants of Canada Regulatory Council (ICCRC). They have the experience and expertise to guide you through the visa application process, from the selection of immigration category to preparing and filing your application, preparing you for an interview and following up with the visa office. The fact that our offices are situated in Vancouver Canada means our clients' applications are evaluated and processed as per the latest updated rules and regulations from the Canadian government.