Sean Fraser, Minister of Immigration, Refugees, and Citizenship, stated on Friday that his agency will extend work permits to family members of temporary foreign employees. 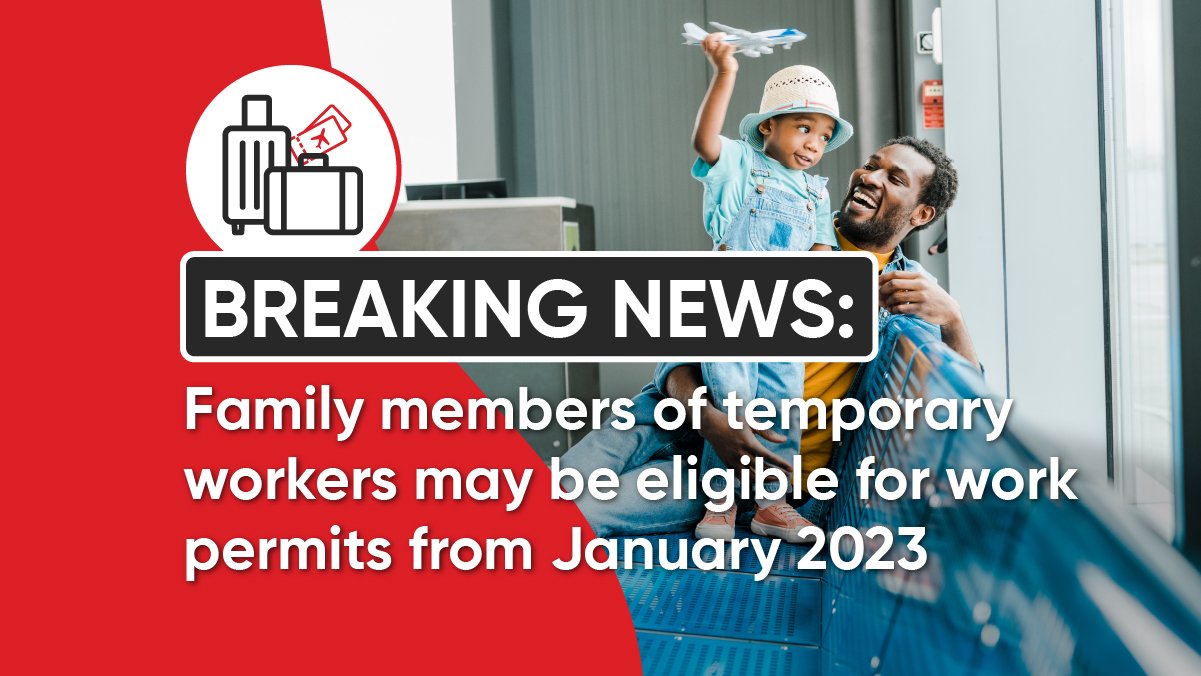 Canada has just announced a new temporary policy that will not only address the labour shortage in the country but benefit many family members of principal applicants. Sean Fraser, Minister of Immigration, said on Twitter, “Today’s news will support the well-being of workers by keeping more families together, while also helping employers find and retain the workers they need.”

To overcome labor shortages, employers and temporary employees will benefit from family work permits. Canada is increasing the number of work visas available to family members! Spouses and children of a primary applicant will be able to work in Canada beginning in 2023.

Spouses are currently only eligible for a work visa if the primary applicant is employed in a high-skilled occupation.

The goal is to extend this to more family members by providing them with an open work permit. Foreign nationals with open work permits can lawfully work for any company and in any position in Canada.

By keeping families together, this temporary solution attempts to promote workers' emotional well-being, physical health, and financial stability. As a consequence, the worker is anticipated to integrate better into their entire work environment and community.

Fraser also posted, “Family members of more than 200,000 foreign workers in sectors such as healthcare, trades, and hospitality will now be able to work in Canada.”

To ensure its success, the interim solution will be deployed in three stages:

Family members of employees arriving to Canada under the high-wage stream of the Temporary Foreign Worker Program or the International Mobility Program will be permitted to apply for an open work permit in Phase 1.

Consultation with agricultural partners and provincial heads will be part of Phase 3.

The policy will be implemented gradually, beginning with the high-wage stream of the Temporary Foreign Workers Program (TFWP) and the International Mobility Program (IMP)

"Expanding the eligibility for work permits to family members accompanying the principal applicant to Canada will help address labour shortages by assisting employers in finding the workers they need,"

Fraser said in a press statement.

The Honourable Sean Fraser, Minister of Immigration, Refugees, and Citizenship, and the Honourable Randy Boissonnault, Minister of Tourism and Associate Minister of Finance, jointly announced that Canada will extend work permits to family members of temporary foreign employees. Extending work permit eligibility to family members accompanying the primary applicant to Canada would help alleviate labour shortages by supporting firms in obtaining the personnel they require.

What It Means For Potential Immigrants and Temporary Workers

The change, according to Fraser, will not only fill holes in the Canadian labour market, but will also make the immigration system more "compassionate." By recognising that a person who is here making a contribution to our economy, deserves to be with their loved ones while they make that contribution," he said.

According to the official Canadian immigration website, Between January and October 2022, Canada issued approximately 645,000 work permits, over four times the 163,000 issued during the same period in 2021.

According to the most current job vacancy data, there were 958,500 available positions in Canada

For more Canadian immigration news, follow us on social media below