Ottawa has reached a last-minute deal with Israel to suspend the deportation of asylum-seekers who currently are waiting for resettlement to Canada. Israel was set to begin deporting some 37,000 asylum-seekers, the majority of them Sudanese and Eritreans, in April after Prime Minister Benjamin Netanyahu’s government issued them expulsion notices.

Israel Agrees With Canada To Halt Deportation Of 2000 Refugees

Ottawa has reached a last-minute deal with Israel to suspend the deportation of asylum-seekers who currently are waiting for resettlement to Canada.

Israel was set to begin deporting some 37,000 asylum-seekers, the majority of them Sudanese and Eritreans, in April after Prime Minister Benjamin Netanyahu’s government issued them expulsion notices.

The asylum-seekers, most of them deemed by Israel to be economic migrants rather than refugees in need of protection, can either leave voluntarily for a “safe” African country and receive $3,500 and a plane ticket, or face imprisonment.

The Canadian government is under the gun to resettle 1,845 of the African refugees whose sponsorship applications are currently in process, some for years. 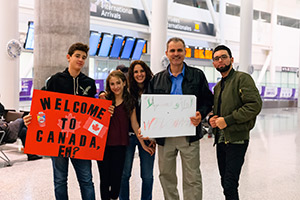 “Canada does not support policies of mass deportations of asylum-seekers. The rights of asylum-seekers and refugees are laid out in the Geneva Convention on the Status of Refugees, of which Israel is a signatory,” said Adam Austen, press secretary for Foreign Affairs Minister Chrystia Freeland.

“As the country that resettles the highest number of African asylum-seekers from Israel, we are in direct contact with the Government of Israel to convey Canada’s concerns about the situation.”

A spokesperson for Immigration Canada confirmed it has reached an agreement with Israeli authorities to allow the Canada-bound asylum-seekers to remain in the country and not be jailed until their sponsorships are finalized.

“We ask that sponsors advise the department should any of their applicants be issued deportation or detention notices,” said Faith St. John. “Our office in Tel Aviv has dedicated resources to deal with the applications.”

Italy Tavor, a spokesperson for the Israeli Embassy in Ottawa, said the country recognizes the significance of the current “migration situation” and has allocated dozens of new staff positions to streamline and expedite the asylum determination process.

“Israel does not hesitate to grant refugee status when required, and follows a procedure consistent with the criteria and standards of international law, laid down by the Convention Relating to the Status of Refugees,” said Tavor in an email to the Star.

“With that said, the data about the migrants who have entered Israel illegally indicates that 70 to 80 percent of the migrants are of working age (19-40 years old) and that there are about five times more men than women. These numbers are consistent with a population that is composed mostly of economic migrants.”

“They will be dropped off at a brand new country, with a brand new language, with no legal status,” said Miedema. “These countries are no safe haven. By sending them there, it becomes somebody else’s problem.”

Joanne Beach, director of justice and compassion for the Christian and Missionary Alliance in Canada, which has a sponsorship agreement with Ottawa, said Canada must do its utmost to expedite the resettlement of refugees.

“The alliance is still concerned for the welfare of those at risk of deportation in Israel who do not have applications currently in process. We are appealing to churches to consider entering into a sponsorship agreement or partnering with a Canadian Jewish organization to help those at imminent risk of deportation from Israel,” said Beach.

“We pray that sufficient resources are put in place (by Ottawa) to reduce backlogs and processing times.”