The American dream is firmly based on the principles of progressing from the lowest ebbs of society to the highest echelons of policy makers and influencers. That dream is still alive, only it’s not alive in America anymore the shoe is on the other side now, the American dream is alive in Canada.

The American Dream Is Alive - in Canada 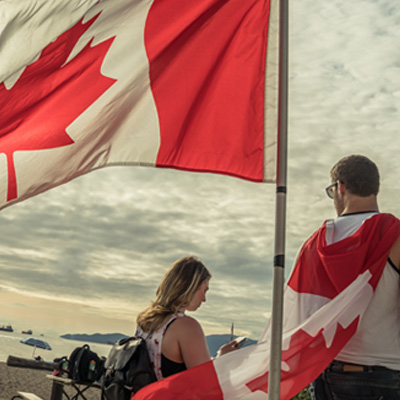 The American dream is firmly based on the principles of progressing from the lowest ebbs of society to the highest echelons of policy-makers and influencers. That dream is still alive, only it’s not alive in America anymore the shoe is on the other side now, the American dream is alive in Canada. What distinguishes the two countries is that Canada is a world leader in economic mobility, and Canadian citizens enjoy the legacy of sound public policies and a very progressive tax system. Even in the most remote parts of Canada residents still have access to good schools, quality health care, and decent homes.

The American dream that has existed in the country for over 50 years is now on life support. For some Americans it may be already dead, more than three-quarters of all Americans believe that downward mobility is more likely than upward mobility. The key elements of the American dream such as comfortable wages, retirement security, opportunity for children to get ahead in life, just to name a few, are now unreachable for all except the wealthiest few. As inequality increases in America, the key elements of the American dream are becoming increasingly unaffordable for the majority.

5 Reasons why the American dream is dying

Even with health insurance, medical healthcare is unaffordable for the majority of Americans. The health coverage in American is the worst of any highly developed nation as many families are continuously having to bear high costs of medical care. A study by the Milliman Actuarial Firm shows that the employer-funded portion of the healthcare costs have risen by almost 52% since 2009 while household costs have risen by a staggering 73% (8% a year) and in the same period household income has fallen by 11%.

This means that in America household healthcare costs are skyrocketing even as household income continues to drop dramatically.

Huge amounts of student debts are crushing the dreams of a majority of non-wealthy Americans. Education for every American who wants to get ahead in life is almost impossible, these days you have to be rich to get a simple college education in the US unless you want to begin your career with a mountain of debts.

As of 2013, tuition fees at a private University in America were estimated to cost nearly $130,000 on average over four years, and that is not counting food, lodging, books, and other expenses. On the other hand, public colleges and universities, once considered a model for free high-quality education are now costing an estimated $12,900 per year. The total cost of on-campus attendance at a public university in America including books and other items is estimated to be over $32,000.

The American dream means having a reasonable rate of income growth for working people and their families but more and more citizens are finding it difficult to achieve. A majority of the US middle-class households haven’t seen their wage rise in the last 15 years. In fact, the percentage of middle-class households in the US is actually falling, and the median household income has continued to fall while income for the wealthy continues to grow.

Not only has the wealth of the rich doubled over the last three years, but corporate revenues are also at record high levels. According to Goldman Sachs, in 2015 corporate profits grew five times faster than wages.

There was a time in America when middle-class families could lead a comfortable lifestyle on one parent’s earnings, those days are gone. An increase in costs, combined with stagnation of wages, means that families are struggling to make ends meet. The stay-at-home parent is now a thing of the past.

Over the years, stagnant wages and an increase in living expenses have rendered the American economy to be more debt-dependent, especially for middle-class households. The majority of American households have become dependent on debt to maintain their standards of living in the face of slow-growing wages.

Canada is a world leader in economic mobility along with Scandinavian countries such as Denmark, Sweden, and Norway. It is true, the US may be richer but it is also significantly more unequal and a lot less mobile.

Canadians are up to three times more economically mobile than Americans and this is due to conditions faced by those living at the very top and bottom of society. In America, the rich kids grow up to be rich adults while in Canada it is more balanced and kids from less privileged backgrounds are able to grow into a much more comfortable life as adults.

The labor market thanks partly to the paid parental leave benefits of Employment Insurance, likewise encourages parents to be parents. Canadian children are more likely to grow up in two-parent homes and in homes where at least one parent works part-time to provide home care.

Canada historically prides itself in being a socially mobile society, where your ability is more important than your race or class you were born into. The idea of equal opportunity is shared throughout Canada. Canadians are more likely to express satisfaction with their government’s efforts to give every citizen a fair chance at success, with health care, early childhood education, and college accessibility all available.

Canada’s middle class is now probably wealthier than its American counterparts, and, indeed now ranks among the world’s richest.

High-quality education, vacations, life without crushing debts, seeing the doctor when you don’t feel well, a chance to retire, these and many more are mainstays in Canadian citizen’s life. Canada is the new land of opportunity.

For more information on why you should immigrate from the US to Canada, click here.

To learn more about our visa options, click here.

Best Ways to Immigrate to Canada from Chile in 2022

Moving to Canada from Chile has never been easier!