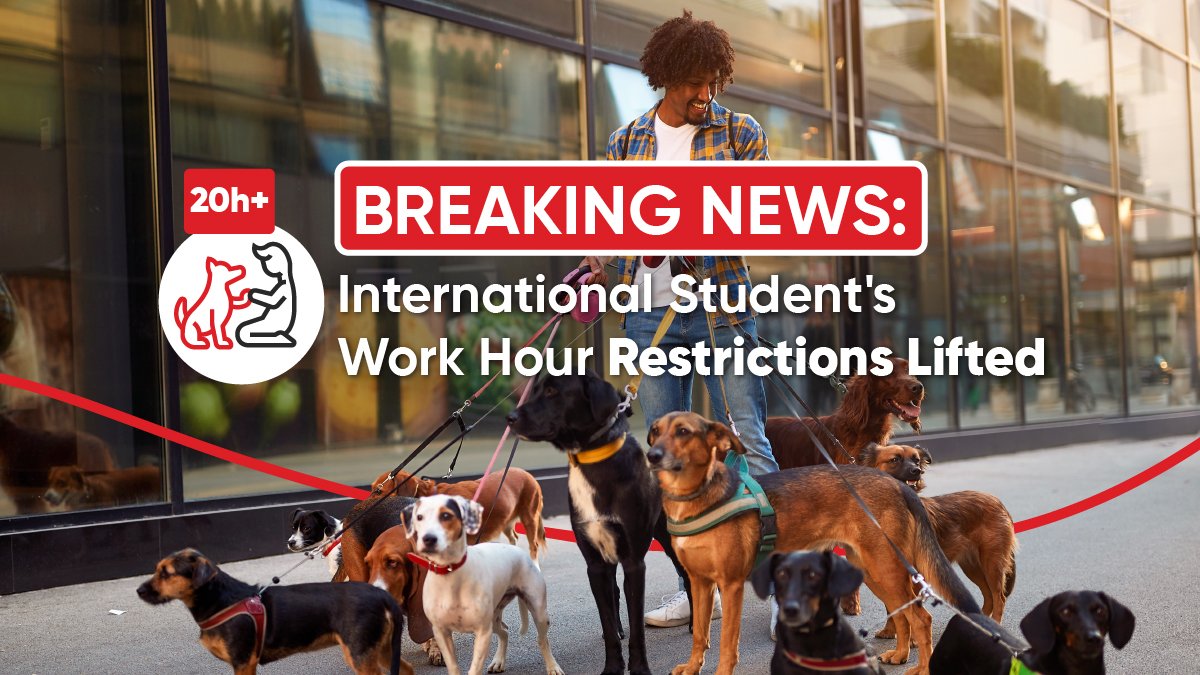 Immigration, Refugees and Citizenship Canada (IRCC) has announced that there will be a temporary lift in the current work hour restrictions placed on international students in Canada. As it stands, international students that are authorized to work off campus are only allowed to do so for less than 20 hours per week. This is about to change for those who work and study in Canada.

Sean Fraser, the Minister of Immigration, stated that the restriction on the stipulated hours, which post-secondary international students qualify for, can work off-campus during term time- which has changed from 20 hours weekly to 40 hours weekly.

Canadian employers continue to search for labour across the country. The Canadian government is still making significant efforts to alleviate the labour shortage. The unemployment rate in Canada dropped from a peak of 6.0% in April 2022 to 5.4% in July. As of July, Canadian firms were actively searching to fill close to 1 million positions.

International students studying in Canada, who have off-campus job permission included on their study permit, will not be subject to the 20-hour restriction from November 15, 2022 to December 31, 2023. This interim adjustment will also apply to foreign nationals who have already applied for a Canadian study permit as of the beginning of October, provided their application is granted.

Fraser stated, "With the economy growing at a faster rate than employers can hire new workers, Canada needs to look at every option so that we have the skills and workforce needed to fuel our growth. Immigration will be crucial to addressing our labour shortage."

This announcement is one of several that are intended to assist foreign graduates and students while assisting Canada's larger objectives to enhance customer service and application turnaround times. Already, the IRCC has introduced a transition period for those studying online to come to Canada, or to apply for a Post Graduate Work Permit (PGWP), if they qualify. Additionally, this is a chance for people whose post-graduation work permits have expired, or are about to expire to get an extra 18-month open work visa.

With the implementation of this legislation, more foreign students will have the chance to work in Canada and more employees will be available to support Canada's post-pandemic growth. This interim amendment recognizes the significant contribution: that more than 500,000 international students currently studying in Canada can solve the labour deficit while pursuing their academic goals.

This mutually beneficial citation is highlighted by Fraser who said, "By allowing international students to work more while they study, we can help ease pressing needs in many sectors across the country, while providing more opportunities for international students to gain valuable Canadian work experience and continue contributing to our short-term recovery and long-term prosperity."

Study permit holders are obliged to manage their obligations to both work and study because they are not permitted to work off-campus if they cease studying or lower their course load to just study part-time.

The processing of study permit extensions will be automated as part of a pilot initiative that IRCC is starting this month. Since all candidates have already received authorisation to study in Canada, the sorts of applications that are part of this pilot program have a consistently high acceptance rate.

With the aim of enhancing customer service, the trial will feature a select sample of candidates who could have their extended study visa handled quicker. If the pilot is a success, it will be expanded to speed up processing and free up officers to handle more complicated applications.

Work and Study in Canada

One of the most popular places for overseas students to study is Canada. Over 620,000 international students attended there in 2021, a number that has quadrupled in the previous 20 years. In only one year, Canada issued approximately 450,000 additional study permits. Regardless of a number of factors, including the high standard of educational institutions, multiculturalism, the accessibility of the Canadian currency, and the availability of employment and permanent residency chances, there is still a high demand to study in Canada.

There are many reasons why so many international students flock to Canada every year. One of the major benefits is that their study permits allow them to work and study in Canada at the same time, thereby making money to support themselves while earning a degree.

Additionally, this later provides qualifying factors for permanent residency as work experience in Canada goes a long way in assisting students to remain in the country after graduation.

Getting a study permit in Canada is a common route for permanent residency later down the line for many prospective immigrants. Because of factors like their Canadian work and study experience, as well as their English and/or French language ability, international students who go on to get permanent residency tend to integrate into the Canadian labour market rapidly- this is why the IRCC provides a variety of programs designed to assist foreign graduates find employment and stay in Canada.

Check out how to get a Canadian study permit today

For more Canadian immigration news, follow us on social media below