For those hoping to migrate to the US Trump has already dismissed climate change, civil rights for LGTB, immigration, and healthcare. Trump has now turned his eye on immigration, while Canada has opened itself to new immigrants. 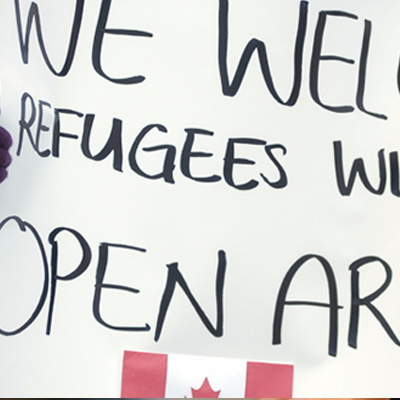 Friday, January 27, 2017, marks the first week of the Trump administration in office. Already the reverberations of his short tenure have been felt in no small terms. It now appears that President Trump’s campaign rhetoric is in full flow. The White House website has instantly removed off climate change, civil rights, LGTB, immigration, and healthcare pages. Worse still, it appears that one of Trump’s first calls on immigration is to block Muslim immigrants and refugees from entering the country. The United States is to block issuing of visas to Syria, Middle Eastern, and other African countries in addition to limiting access to the US for most refugees albeit temporarily according to the US State Department.

It is in keeping with his campaign promise for a “complete shutdown of Muslims entering the United States”.

This all makes the notion of moving to the country’s next-door neighbors Canada all the more viable and sensible if it wasn’t the case already.

In the flawed and inhumane immigration plan announced by President Trump’s administration, the following are the key points:

It is now clearer than ever that Canada, the United State's illustrious neighbour, is poised to gain an advantage out of these events. Canada has long been in the shadow of the US but if recent developments are to be considered Canada is the new land of opportunity. Led by their savvy Prime Minister Justin Trudeau, Canada has a rapidly growing economy, with solid international relations proved by the recent removal of Visa restrictions of Mexican citizens moving to Canada and receiving a large number of Syrian refugees. Moving to Canada from the US has become a necessity not to be ignored.

All you’ve heard regarding the welcoming of Canadians is in no way just a stereotype. Canada is frequently lauded as a land of immigrants since a large number of newcomers have successfully settled there. Canada is blessed with a supportive government and a booming economy that enjoys an unemployment rate of record lows.

While President Trump is bent on overhauling the controversial Obamacare health plan, at a huge cost to the taxpayer, Canada boasts in the fact that the quality of health care in Canada is top class, they are constantly receiving commendations and positive reviews that affirm this. Canada has had universal medicinal care subsequent to the 1960s through the Medical Care Act of 1966, whereas Obamacare is still struggling to take off. Canadians, in general, have very little to no financial burdens or hassles, which aids in its high quality of life and prevents sickness and disease.

A 2014 healthcare report by the Commonwealth Fund states “The U.S. healthcare system is the most expensive in the world, but this report and prior editions consistently show the U.S. underperforms relative to other countries”.

In the USA, same-sex marriage was legalized by the Supreme Court in June 2015. Canada though, sanctioned same-sex marriage 10 years prior at the government level. When Conservative Prime Minister Stephen Harper took office in 2006, he picked not to return to prohibiting same-sex marriages. Canadian Prime Minister Justin Trudeau in December welcomed the nation's first refugees from Syria. Canada has said that it has met its objective of inviting 25,000 Syrian refugees. Former Immigration Minister John McCallum said the next step is finding permanent jobs for these refugees as well as putting them through French or English language courses.

Canadian Prime Minister Justin Trudeau in December 2015 welcomed the nation's first refugees from Syria. Canada has said that it has met its objective of inviting 25,000 Syrian refugees. Former Immigration Minister John McCallum said the next step is finding permanent jobs for these refugees as well as putting them through French or English language courses.

The rate of crime with guns in the USA is more than six times as high as in Canada, as per the United Nations Office on Drugs and Crime. Also rated the 7th safest country in the world. In fact, the USA holds a dubious distinction in outpacing most developed countries in this category, including Norway, England, Wales, Australia, New Zealand, and Germany, and the Netherlands. In Canada, only licensed individuals can buy firearms, which is a lengthy process that requires a safety course and exam, a 45-day wait to process an application, and a 28 day waiting period for those who don’t currently own a firearm. There are also several restrictions, on certain types of powerful handguns and magazines for automatic and semiautomatic firearms.

Canada is in the top ten of the world’s largest economies with approximately $1.79 trillion, in the world’s top ten trading nations, and is a member of the Group of Eight (G8) in the highly globalized economy. There are three main types of industries in Canada that help aid the economy, these include natural resources, manufacturing, and resources.

Canadians are known as people who are proud of their diverse and multicultural society. In Canada, many of the different cultural and ethnic groups live together in peace and perfect harmony in the same communities, where everyone’s rights are respected. Multiculturalism in Canada is encouraged by the government through the Canadian Charter of Rights and Freedoms, and the Canadian Multiculturalism Act. These laws state that all Canadians are free to share their multicultural heritage.

One major part of Canada’s multiculturalism is the existence of the Aboriginal people. The Aboriginal people lived in Canada for thousands of years way before the first wave of immigrants arrived, and they are given additional rights which aim to protect their culture and languages and to become self-governing.

Visa options for immigration to Canada

The Canadian government has put in the effort and created institutions that provide support and facilitate the process of immigration to make sure that new immigrants are settling well in their new communities and society as a whole. Canada has a diverse and multicultural environment that is tolerant of all minorities, a stunning geographical landscape, abundant natural resources, numerous job opportunities, and rewarding investment opportunities. The following are some of the visa options available for immigration to Canada;

This is a Canadian Immigration system that enables people to immigrate to Canada within six months as skilled workers through Federal Economic Programs.

This is a visa program that enables foreign nationals to immigrate to Canada as permanent residents without the need for a sponsor or an employer.

One of the most popular visa options in Canada, a Student Visa enables international students to study any course in Canada and the opportunity to apply for permanent residence after graduation.

The Tourist Visa otherwise known as a Visitor’s Visa allows people to enter Canada for a short period, usually for 6 months, whether for holiday, visiting family, or a short study course.

The Working Holiday Visa is a short-term visa that allows travelers to obtain work to fund and support their holidays.

A Temporary Visa allows foreign nationals to visit Canada for a short period of time, it can be either for holiday, work, or study purposes.

The Family Visa allows Canadian citizens and permanent residents to sponsor their immediate family members and relatives to live, work and study in Canada.