Quebec’s target number of new permanent residents is over 50,000 as stated in the Plan d'immigration du Québec for 2023. 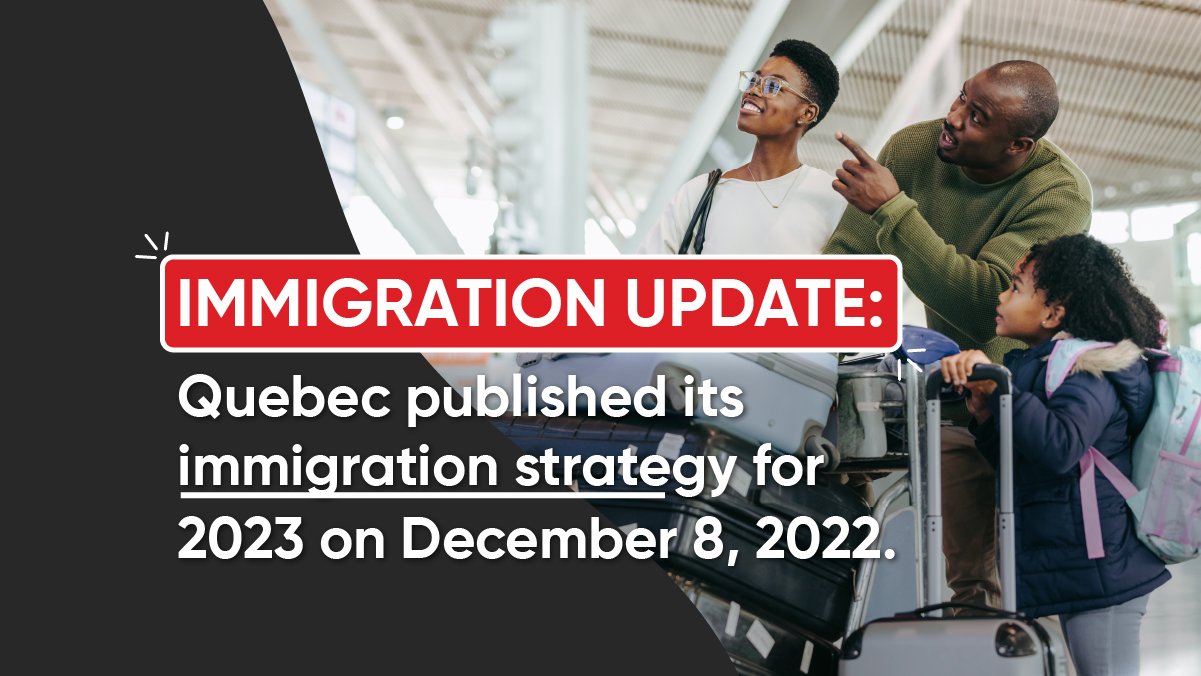 Up to 52,500 new permanent residents might be accepted in 2023, according to the immigration strategy for the province of Quebec, which was unveiled on December 8 of the previous year. The same objective will be pursued by the immigration policy for 2022.

The majority of new admissions in 2023 will come through the province's economic immigration initiatives, namely the Quebec Experience Program and the Quebec Skilled Worker Program.

According to StatCan, About 22% of Canadians live in Quebec. As a result, it has a greater claim to a portion of the yearly immigrant inflow. In accordance with the Immigration Levels Plan for Canada 2023–2025, 465,000 new permanent residents will enter the country in 2023. This implies that Quebec is legally permitted to accept 102,300 immigrants. The Quebec government, however, opted to pick only half of that sum. Let's investigate the benefits of the new Quebec immigration strategy for 2023.

Each year, the Quebec Immigration Department releases its immigration plan. The province expects to accept a certain number of new permanent residents in the forthcoming year, and the paper details the categories in which they will be admitted. Goals for the following year are merely part of the plans that have been made public thus far. But in 2023 there will be a consultation, and the provinces will then draft a multi-year plan that will begin in 2024.

Quebec focused its announcement on the 2023 Economic immigration.

In 2023, economic immigration will account for the majority of new admissions to Quebec. This applies to both the Quebec Experience Program (QEP) and the Quebec Skilled Worker Program (QSWP)

Similar to its immigration goal for 2022, the province intends to accept up to 33,900 immigrants via the Economic Immigration program. With almost 65% of anticipated admissions, the economic group constitutes the biggest percentage of newcomers. It’s set to welcome up to 4,300 business immigrants, including investors, entrepreneurs, and self-employed persons; up to 29,500 skilled employees; and up to 100 individuals in other economic categories.

The 2023 plan still closely resembles the 2022 plan since the Coalition Avenir Québec (CAQ) gained a second term as the nation's ruling party earlier this year with a strong majority.

The 2022 plan, created under the guidance of the current premier François Legault, aimed to progressively increase the number of entrants after decreasing admission targets in 2019. In order to improve the selection and francization of newcomers to Quebec, the CAQ set a 20% threshold that year.

According to the Ministry of Immigration, Francization, and Integration, 66% of immigrants in general and 79% of economic immigrants are anticipated to speak French fluently in 2023.

The topic of immigration in Quebec was a hot topic during this year's provincial election. While in government, Legault promised to keep Quebec's immigration at 50,000 per year. He asserts that this is the maximum number of immigrants that Quebec can accommodate due to the challenges associated with assimilating newcomers into Quebec society, particularly those who must learn French.

French is so important in Quebec that the Quebec government pays you to learn French. For qualified immigrants, there are government-sponsored programs that offer financial aid for French language study.

The government will pay qualified entrants CAD$205 per week for full-time French study, plus $25 per week for transport expenses and $25 for each kid who needs childcare while you attend the course.

How to Immigrate to Quebec

In accordance with Canadian legislation, Quebec is solely responsible for choosing the economic immigrants who will immigrate to the province. However, choosing family class and protected immigrants for the province is outside the province's purview.

Quebec does not participate in federal programs like the Provincial Nominee Program (PNP) or any programs run by the Express Entry system since it has greater immigration power than any other province.

Here is a brief summary of some of the Quebec immigration schemes open to professionals:

Ready to move to Quebec? Book a consultation with a Registered Canadian Immigration Consultant (RCIC) and find out your best options to move to Canada.